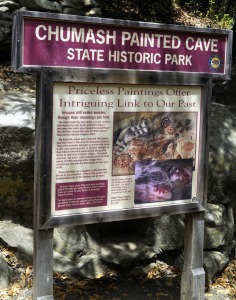 We packed so much into our fourth Furlough Foray!  We headed up the 101 freeway to the 154 and up the San Marcos Pass.  Almost an hour after leaving our house, and winding and twisting our way for two miles up Painted Cave Road, we came upon the the Chumash Painted Cave State Historic Park.  It was like we’d traveled to another place – in a short period of time, we went from the beach to a hilly forest where it was only 55 degrees outside.


We must have driven right past the turnoff to Painted Cave Road dozens of times on our way to Santa Ynez, Los Olivos, and Solvang, and never given it a second thought, but nestled at the side of a one-lane country road is this remarkably well-preserved piece of California history.

The Chumash Indians enjoyed life throughout what is now know as Santa Barbara and Ventura Counties and the Channel Islands for thousands of years.  Their tribes began to diminish when missionaries introduced diseases from Europe which their bodies had no natural immunity to.  They were an amazing tribe who left a lasting legacy in this coastal region.  This cave is believed to a sacred place.  It is absolutely worth the 20 minute detour from the San Marcos Pass to see these rare Chumash Indian paintings.

Next, we stopped at Cachuma Lake.  The water level was very low as we live in a constant state of drought in Southern California, but it was so turquoise and beautiful!  The Bradbury Dam is a Federally-managed Water Reclamation project.  Although it is known for camping, sporting, and fishing, we just stopped to enjoy the view.

We continued along the 154 until we reached Los Olivos, then turned left onto Grand Avenue.  By this time, it was 80 degrees outside – quite a contrast from the cave!  We usually eat at the Los Olivos Cafe, which is excellent, but decided to try something different and had Greek food at Petros.  The food was good (except for the Tzatziki which had way too much garlic in it!), but the setting was exceptional.  We had lunch in a beautiful garden courtyard, tucked away from the busy main street. 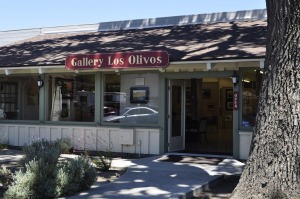 The Gallery Los Olivos is an artists’ cooperative and we really loved the artwork of Sheryl Knight and Linda Mutti.  (This gallery definitely warrants a post-furlough visit!) 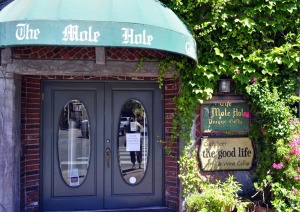 From there, we made our way to Solvang to visit a long-time favorite gift shop, The Mole Hole where we had a lot of fun and found some great gifts.  Another place to return to post-furlough. 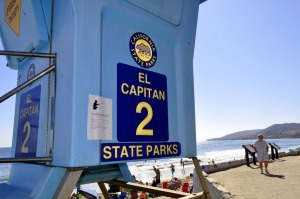 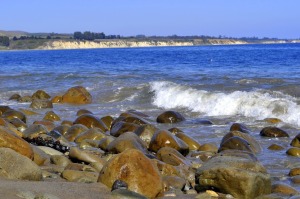 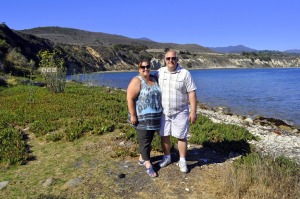 We made the loop back to the 101 and headed to El Capitan State Beach which was so gorgeous!  Located north of Goleta, it’s open for camping and day use and is just lovely. 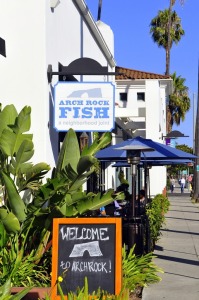 The lovely ending of our day trip was a wonderful dinner at Arch Rock Fish in Santa Barbara.  It was our first visit to this restaurant but will definitely not be our last.  The service was great and the food was so fresh and delicious.  We started with the best Calamari we’ve had in ages.  After salad, John had Seabass and I had Rainbow Trout.  We enjoyed our meal with a bottle of Italian Pinot Grigio and finished it all with a shared piece of homemade apple pie. 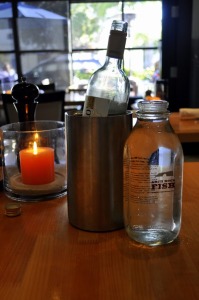 On a more serious note:  This marks the fourth week of one day of involuntary unpaid leave for hundreds of thousands of Federal employees.  Some in leadership are spending more time and energy blaming others than it would take to focus on developing a viable, livable solution to resolving the Federal deficit, but these are the leaders the majority of us elected to represent us.  I have been trying to keep my posts positive and upbeat, but ran headlong into reality today when I received my pay stub.  With two less days in my check, I took a 20% hit to gross pay.  But, wait, there’s more!  Our insurance premiums are the same as before furlough.  After the 10th furlough day, John & I will each forfeit 12 hours of leave.  After the 11th furlough day, 12 more hours.  Our contributions to retirement are based on a percentage of our earnings, so reducing them has long-ranging consequences.  Some people may wonder what the big deal is.  The big deal is we are professional, educated people who chose a career in public service because we believe in working hard to defend America and freedom and now we’re being told that it really doesn’t matter. To learn more about what exactly it means to be furloughed, check out this useful guide that explains some of the differences between furlough vs layoff.

Some people have asked, “Don’t you think you should do your share?”  That’s a really easy thing to say when you’re not being effected.  Keep in mind that I have a professional job and a Master’s Degree.  I personally have to take out my trash because services have been completely cut in my building.  No one vacuums, no one cleans anything, except for the bathrooms, which has been reduced from five days a week to two.  We have not had a pay raise in almost four years.  Do I think I should do my share?  I think I’ve been doing my share.  John, who used to travel to the East Coast three weeks out of each month, now has to dial into teleconferences at 5 or 6 a.m. to accommodate East Coast work hours, then he puts in a full day on West Coast time which often adds up to 12-hour days.  I think John is doing his share.  This is a tough situation.  John and I are no different than all the other Civil Servants who are being furloughed, I just think it’s important for people to understand how we’re being impacted in a very personal way.  We are trying to make the best of our time off and share that with all of you, too.