You know when people ask what your favorite food is?  I can never choose just one but cheese is absolutely in my top five!  France is known for gourmet food and drink and French cheese is among the world’s best.  I especially love creamy cheeses so I was thrilled when Fromagerie Guilloteau offered to send me samples of their Fromager d’Affinois double cream cheeses.  Of course, they’re delicious to eat just as they are but we wanted to create a special way to showcase them.  For the Fromager d’Affinois, I created a simple Tartine with grapes and walnuts.  And for the Fromager d’Affinois Bleu, John made a lovely sauce that we enjoyed over Filet Mignons.

A Tartine is a simply an open-faced sandwich,  To make this version, center a slice of Fromager d’Affinois on a split baguette and place it under the broiler just long enough to melt the cheese, then scatter grapes and walnuts over it.  You won’t find a better lunch!  The creaminess of the cheese plays so nicely with the crunch of the bread and walnuts and cool freshness of the grapes.

Fromager d’Affinois – As the top-selling cheese for Fromagerie Guilloteau, this smooth double cream cheese expresses the cheesemaker’s expertise and delicacy in the cheese maturing process. In addition to the original Fromager d’Affinois, this cheese also comes in flavors of Garlic & Mixed Herbs, Olive, Truffle, and Pepper. The high fat-content of this cheese positions it halfway between a traditional Brie and a triple-cream cheese. Its bloomy white rind surrounds a seductively soft interior and its mild & buttery flavor features a hint of sweetness. – Press release

This delicious sauce pairs perfectly with filet mignon.  We served it with Parsley Potatoes and Roasted Asparagus.  It’s really fragrant, easy to make, and elegant.  Alternatively, you could just place a slice of Fromager d’Affinois Bleu on your steak as soon as it comes out of the oven! 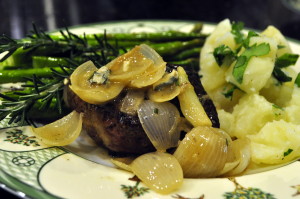 Fromager d’Affinois Bleu – This cheese combines the tang of blue cheese with the smoothness of the Fromager d’Affinois. Its mild edible rind surrounds a delicious yellow paste that is speckled with beautiful blue veins. Its luscious velvety texture is similar to buttercream icing — soft and easily spreadable. – Press Release

Fromagerie Guilloteau is a family-owned business with two production sites located in the southeast part of France, near the Alps. Fromagerie Guilloteau was created in 1981 with the production of the first Pavé d’Affinois cheese, using ultra-filtration methods. This process retains all the nutrients of the milk in the cheese, which gives a unique taste and texture to the cheese.

We thoroughly enjoyed both of these cheeses and look forward to trying some of the other varieties as the weather warms up and we can start enjoying picnic-style lunches in our garden.  If you love creamy cheeses, you will love Fromager d’Affinois!