At first glance, you’d swear Roy Fares was a native-born Californian!  His joie de vivre literally jumps right off the colorful pages of his new cookbook, United States of Cakes, as he travels around SoCal highlighting bakeries and fabulous recipes.  Roy is a Swede who was born in Lebanon and an accomplished baker from a very young age.   United States of Cakes not only features Roy’s interpretation of dozens of American desserts it’s full of  gorgeous photos.  I was thrilled to receive a review copy from Skyhorse Publishing because, you know I love to bake.   You can read all about his award-winning career on his website which is written in Swedish and English.  If you’re a home baker, or hoping to become one, you’ll love this book.  His directions are easy to follow and the results are amazing which also makes it a perfect gift for anyone who enjoys baking.

The United States of America is huge, and there is, of course, a never-ending amount of baked goods to discover in this country, but in this book I’ve picked just over fifty recipes that I think are the best of all. The recipes are American at their core, but I have adapted them a bit according to my own palette. That is to say, I’ve concentrated the flavors and reduced the amount of sugar a little. ~ Roy Fares 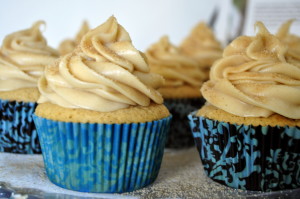 Author:
Roy Fares
Recipe type: Dessert
Cuisine: American
Serves: 12
Prep time: 30 mins
Cook time: 18 mins
Total time: 48 mins
Print
I decided on the name “snickerdoodle” because I thought it sounded so fun. Snickerdoodle is a good, rustic cookie flavored with cinnamon. My cupcakes have the same flavor but with icing on top. These cupcakes go well with any occasion—especially the Christmas season. Copyright Roy Fares and Skyhorse Publishing
Ingredients
Instructions
3.2.2925

I have a confession to make.  This is the first time I’ve ever used the convection setting on my oven!  I loved  it.  with continuous air-flow, my cupcakes baked up perfectly and evenly. Wow, and these cupcakes should be called “The Mysterious Disappearing Cupcakes.”  John and I each ate two as soon as I frosted them.  We love cinnamon, so these were an easy first choice from to make from Roy’s book.  But, the truth is, I’d love to bake my way through all of his recipes.  Sour cream keeps these cupcakes moist while cream cheese adds an extra dimension of flavor to the frosting.  The cinnamon comes at you in three layers – the cake, the frosting, and the cinnamon sugar sprinkled on top.  These cupcakes are as delicious as they are addictive!

With over 50 delicious pastry recipes from various beloved patisseries such as, Magnolia’s, Crumbs, and Sweet Lady Jane, United States of Cakes reminds us of the simple pleasures in life and showcases the sweeter side of American cuisine. Join Roy as he travels from the arid deserts of Palm Springs to the glamorous streets of Beverly Hills, sampling, baking, and learning about delicious treats. ~ Press Release