Remember when I was invited to write a feature on the new Vom Fass store in downtown Ventura?  Well, I was thrilled to be invited back for their Tour of Scotland whisky tasting event.  Of course, I brought my resident whisky expert, John!  John lived in Scotland for several years and he learned about Scotch Whisky while tasting it with his dad.  We were immediately greeted by Eric Alcorn who hosted me on my previous visit to the shop.  He showed us a map of Scotland and explained a little about the whisky from each region.

Whisky is traced back to the 1400s in Scotland where it was made by monks for medicinal purposes. Through the ages, the whisky-making process was learned by surgeon-barbers and other distillers.  When taxes grew too high, whisky-making went underground and was sold by boot-leggers until the mid-late 1800s.  Now there are micro and major distilleries around Scotland’s waterways.  Fast-forward to today when we are lucky to taste small-batch Scotch Whisky in America.  Each offering from Vom Fass is personally selected and exclusively offered by them outside of the distillery.

Eric poured small tastes of six exclusive Scotch Whiskies.  Just like during a wine tasting, we moved from the lightest to the most robust flavors.  We started with Blair Athol, a 12-year-old single malt Scotch, aged in Sherry casks in a distillery that was established in 1825.  Next, we tried Dailuaine, a 12-year-old Speyside single malt Scotch aged in oak.  We moved along to Auchentoshan, an exclusive 16-year-old triple-distilled Scotch  from a distillery near Glasgow.  Next, we tasted Bowmore, a 22-year-old single malt Scotch from a distillery in the Island of Islay that was established in 1823.  This rare whiskey is a wonderfully mellow with hints of hay and honeysuckle.  The Cragabus Scotch is a proprietary blend, created by master blender, Stewart Laing, of Whisky from some of the most famous Islay distilleries: Laphroig, Caol Ils, Bowmore, and Ardbeg.   Since we were enjoying the Scotch immensely, Eric poured the 12-year-old Dailuaine Speyside for us as well.  It was really smooth with an oaky, honey finish.

When John asked what I wanted to take home, I told him that I liked the Dailuaine Speyside and that he should get whatever else he liked.  I also wanted to get the Vanilla Dream Liqueur that I had tasted the last time I was at Vom Fass.  Deena, one of the salespeople, suggested we try a 2:1 mix of Latte Machiatto Creme with Irish Whiskey Liqueur – it was amazing!  Just pour it into a cocktail shaker filled with crushed ice, shake until cold, and strain into a glass.  The Latte Machiatto Creme is a creamy coffee liqueur and the Irish Whiskey Liqueur is a blend of whiskey, honey, and lemon.  The combination is a bit like Bailey’s Irish Cream but SO much better!  Of course, we added those to our shopping basket, too.  We tried to come up with a fun name for this drink.  I kind of like “Deena’s Dream Liqueur.”

We have a lovely wine broker who always says, “Don’t cook with it if you wouldn’t drink it.”  Well, we think the same is true about Scotch, so we made this wonderful Whiskey Caramel Sauce and served it over French vanilla ice cream.  It was a sweet, peaty, and buttery complement to the ice cream.  It would make a delicious milkshake, or imagine a spoon swirled into hot coffee. 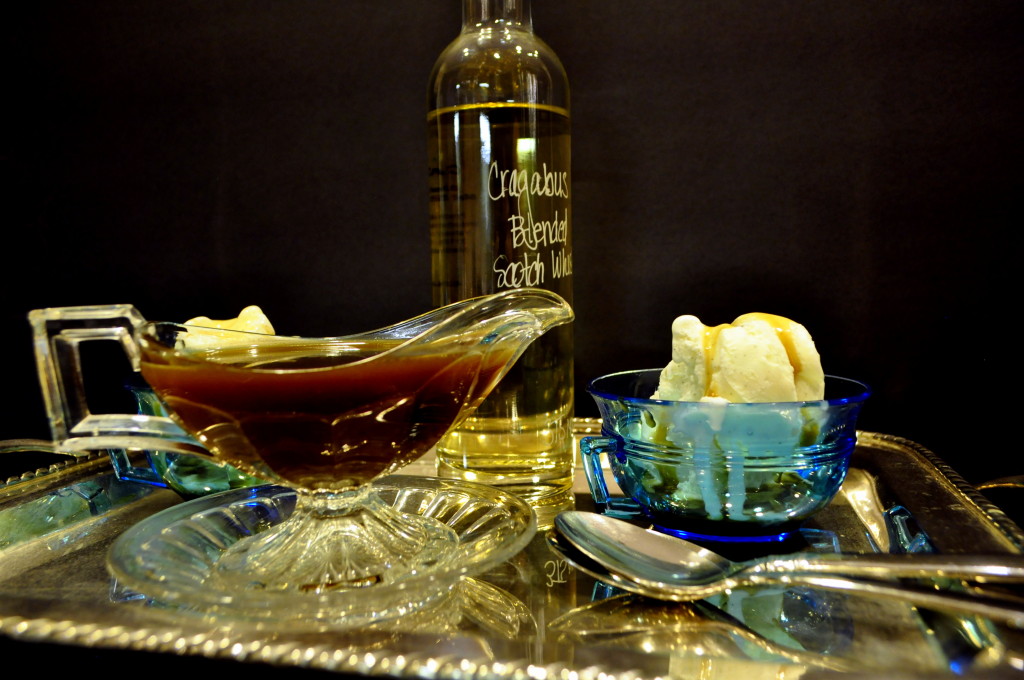 Author:
John Lester
Recipe type: Dessert
Serves: 1 cup
Print
Ingredients
Instructions
3.3.3077
Whether you’re looking for a treat for yourself, or a friend, be sure to stop by Vom Fass for a fun tasting experience.  You’re sure to come away with a one-of-a-kind gift.  They will fill any shape/size bottle with anything you like – oh, and you get to taste it, too!